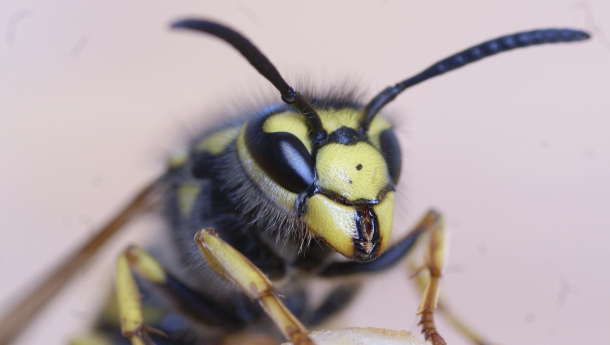 Yellowjackets or yellowjackets are the common name in North America for predatory social wasps of the general Vespula and Dolichovespula. Members of these genera are known simply as “wasps” in other English-speaking countries. Most of these are black and yellow like the eastern yellowjacket Vespula maculifrons and the aerial yellow jacket Dolichovespula arenaria; some are black and white like the bald-faced hornet, Dolichovespula maculata. Others may have the abdomen background color red instead of black. They can be identified by their distinctive markings, their occurrence only in colonies, and a characteristic, rapid, side-to-side flight pattern prior to landing. All females are capable of stinging. Yellowjackets are important predators of pest insects. 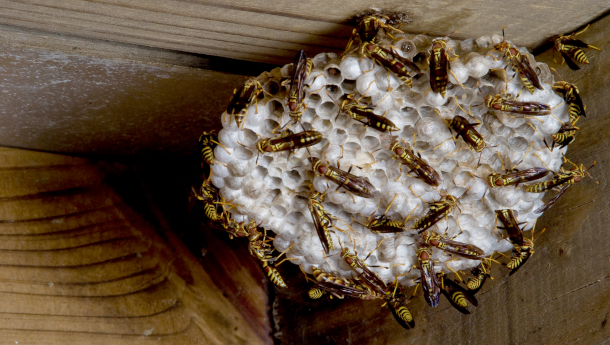 Yellowjackets may be confused with other wasps, such as hornets and paper wasps such as Polistes dominula. A typical yellowjacket worker is about 12 mm (0.5 in) long, with alternating bands on the abdomen; the queen is larger, about 19 mm (0.75 in) long (the different patterns on their abdomens help separate various species).

Yellowjackets are sometimes mistakenly called “bees” (as in “meat bees”), given that they are similar in size and general coloration to honey bees, but yellowjackets are actually wasps. In contrast to honey bees, yellowjackets have yellow or white markings, are not covered with tan-brown dense hair on their bodies, do not carry pollen, and do not have the flattened, hairy hind legs used to carry it.

A FEW STEPS TO HELP YOU WITH YELLOW JACKETS

Below are a few steps, along with trained pest control professionals, you can take to help rid your home or business of a Yellow Jacket invasion.

The Yellow Jacket killer that we use is designed to protect your home or business for an extended period of time.

Call us! After discussing your options and with your approval, we will begin to rid the area around your home or business of those aggressive and invasive Yellow Jackets.

Yellowjackets are social hunters living in colonies containing workers, queens, and males (drones). Colonies are annual with only inseminated queens overwintering. Fertilized queens are found in protected places such as in hollow logs, in stumps, under bark, in leaf litter, in soil cavities, and in man-made structures. Queens emerge during the warm days of late spring or early summer, select a nest site, and build a small paper nest in which they lay eggs. After eggs hatch from the 30 to 50 brood cells, the queen feeds the young larvae for about 18 to 20 days. Larvae pupate, then emerge later as small, infertile females called workers. Workers in the colony take over caring for the larvae, feeding them with chewed up meat or fruit. By midsummer, the first adult workers emerge and assume the tasks of nest expansion, foraging for food, care of the queen and larvae, and colony defense.

From this time until her death in the autumn, the queen remains inside the nest, laying eggs. The colony then expands rapidly, reaching a maximum size of 4000 to 5000. workers and a nest of 10,000 to 15,000 cells in late summer. The species V. squamosa, in the southern part of its range, may build much larger perennial colonies populated by scores of queens, tens of thousands of workers, and hundreds of thousands of cells. At peak size, reproductive cells are built with new males and queens produced. Adult reproductives remain in the nest fed by the workers. New queens build up fat reserves to overwinter. Adult reproductives leave the parent colony to mate. After mating, males quickly die, while fertilized queens seek protected places to overwinter. Parent colony workers dwindle, usually leaving the nest to die, as does the founding queen. Abandoned nests rapidly decompose and disintegrate during the winter. They can persist as long as they are kept dry, but are rarely used again. In the spring, the cycle is repeated; weather in the spring is the most important factor in colony establishment.

Dolichovespula species such as the aerial yellowjacket, D. arenaria, and the bald-faced hornet, tend to create exposed aerial nests. This feature is shared with some true hornets, which has led to some naming confusion.

Yellowjacket nests usually last for only one season, dying off in winter. The nest is started by a single queen, called the “foundress”. Typically, a nest can reach the size of a basketball by the end of a season. In parts of Australia, New Zealand, the Pacific Islands, and southwestern coastal areas of the United States, the winters are mild enough to allow nest overwintering. Nests that survive multiple seasons become massive and often possess multiple egg-laying queens.

In the United States

The German yellowjacket (V. germanica) first appeared in Ohio in 1975, and has now become the dominant species over the eastern yellowjacket. It is bold and aggressive, and can sting repeatedly and painfully. It will mark aggressors and pursue them. It is often confused with Polistes dominula, an invasive species in the United States, due to their very similar pattern. The German yellowjacket builds its nests in cavities—not necessarily underground—with the peak worker population in temperate areas between 1000 and 3000 individuals between May and August. Each colony produces several thousand new reproductives after this point through November.

The eastern yellowjacket builds its nests underground, also with the peak worker population between 1000 and 3000 individuals, similar to the German yellowjacket. Nests are built entirely of wood fiber and are completely enclosed except for a small entrance at the bottom. The color of the paper is highly dependent on the source of the wood fibers used. The nests contain multiple, horizontal tiers of combs within. Larvae hang within the combs.

In the southeastern United States, where southern yellowjacket (Vespula squamosa) nests may persist through the winter, colony sizes of this species may reach 100,000 adult wasps. The same kind of nest expansion has occurred in Hawaii with the invasive western yellowjacket (V. pensylvanica).