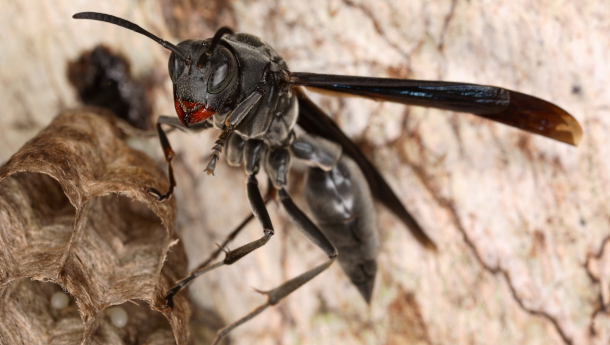 A wasp is any narrow-waisted insect of the order of ants, bees, wasps, and sawflies (Hymenoptera) that is neither a bee nor an ant; some of them can sting their insect prey. The wasp-waisted insects are a complete natural group with a single ancestor; wasps are not such a group, as they do not include the bees and the ants.

The most commonly known wasps, such as yellowjackets and hornets, are in the family Vespidae and are eusocial, living together in a nest with an egg-laying queen and non-reproducing workers. Eusociality is favoured by the unusual haplodiploid system of sex determination in Hymenoptera, as it makes sisters exceptionally closely related to each other. However, the majority of wasp species are solitary, with each adult female living and breeding independently. Females typically have an ovipositor for laying eggs in or near a food source for the larvae, though in the Aculeata the ovipositor is often modified instead into a sting used for defense or prey capture. Wasps play many ecological roles. Some are predators or pollinators, whether to feed themselves or to provision their nests. Many, notably the cuckoo wasps, are kleptoparasites, laying eggs in the nests of other wasps. Many of the solitary wasps are parasitoidal, meaning they lay eggs on or in other insects (any life stage from egg to adult) and often provision their own nests with such hosts. Unlike true parasites, the wasp larvae eventually kill their hosts. Solitary wasps parasitize almost every pest insect, making wasps valuable in horticulture for biological pest control of species such as whitefly in tomatoes and other crops. 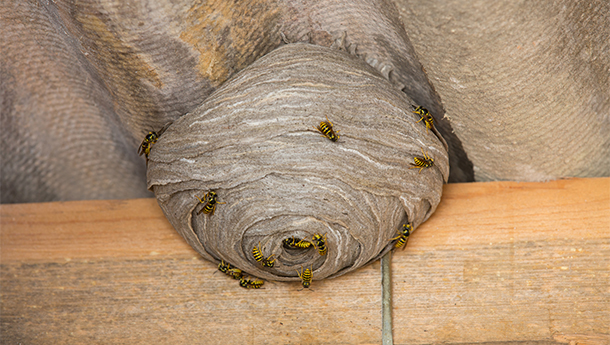 Wasps first appeared in the fossil record in the Jurassic, and diversified into many surviving superfamilies by the Cretaceous. They are a successful and diverse group of insects with tens of thousands of described species; wasps have spread to all parts of the world except for the polar regions. The largest social wasp is the Asian giant hornet, at up to 5 centimetres (2.0 in) in length; among the largest solitary wasps is a group of species known as tarantula hawks, along with the giant scoliid of Indonesia (Megascolia procer). The smallest wasps are solitary chalcid wasps in the family Mymaridae, including the world’s smallest known insect, with a body length of only 0.139 mm (0.0055 in), and the smallest known flying insect, only 0.15 mm (0.0059 in) long.

Wasps have appeared in literature from Classical times, as the eponymous chorus of old men in Aristophanes’ 422 BC comedy Σφῆκες (Sphēkes), The Wasps, and in science fiction from H. G. Wells’s 1904 novel The Food of the Gods and How It Came to Earth, featuring giant wasps with three-inch-long stings. The name “Wasp” has been used for many warships and other military equipment.

A FEW STEPS TO HELP YOU WITH WASPS

Below are a few steps, along with trained pest control professionals, you can take to help rid your home or business of a Wasp invasion.

The Wasp killer that we use is designed to protect your home or business for an extended period of time.

Call us! After discussing your options and with your approval, we will begin to rid the area around your home or business of those aggressive and invasive Wasp.

Wasps are a diverse group, estimated at over a hundred thousand described species around the world, and a great many more as yet undescribed. For example, there are over 800 species of fig trees, mostly in the tropics, and almost all of these has its own specific fig wasp (Chalcidoidea) to effect pollination.

Many wasp species are parasitoids; the females deposit eggs on or in a host arthropod on which the larvae then feed. Some larvae start off as parasitoids, but convert at a later stage to consuming the plant tissues that their host is feeding on. In other species, the eggs are laid directly into plant tissues and form galls, which protect the developing larvae from predators but not necessarily from other parasitic wasps. In some species, the larvae are predatory themselves; the wasp eggs are deposited in clusters of eggs laid by other insects, and these are then consumed by the developing wasp larvae.

The largest social wasp is the Asian giant hornet, at up to 5 centimetres (2.0 in) in length. The various tarantula hawk wasps are of a similar size and can overpower a spider many times its own weight, and move it to its burrow, with a sting that is excruciatingly painful to humans. The solitary giant scoliid, Megascolia procer, with a wingspan of 11.5 cm, has subspecies in Sumatra and Java; it is a parasitoid of the Atlas beetle Chalcosoma atlas. The female giant ichneumon wasp Megarhyssa macrurus is 12.5 centimetres (5 in) long including its very long but slender ovipositor which is used for boring into wood and inserting eggs. The smallest wasps are solitary chalcid wasps in the family Mymaridae, including the world’s smallest known insect, Dicopomorpha echmepterygis (139 micrometres long) and Kikiki huna with a body length of only 158 micrometres, the smallest known flying insect.

There are estimated to be 100,000 species of ichneumonoid wasps in the families Braconidae and Ichneumonidae. These are almost exclusively parasitoids, mostly utilising other insects as hosts. Another family, the Pompilidae, is a specialist parasitoid of spiders. Some wasps are even parasitoids of parasitoids; the eggs of Euceros are laid beside lepidopteran larvae and the wasp larvae feed temporarily on their haemolymph, but if a parasitoid emerges from the host, the hyperparasites continue their life cycle inside the parasitoid. Parasitoids maintain their extreme diversity through narrow specialism. In Peru, 18 wasp species were found living on 14 fly species in only two species of Gurania climbing squash.

Like all insects, wasps have a hard exoskeleton which protects their three main body parts, the head, the mesosoma (including the thorax and the first segment of the abdomen) and the metasoma. There is a narrow waist, the petiole, joining the first and second segments of the abdomen. The two pairs of membranous wings are held together by small hooks and the forewings are larger than the hind ones; in some species, the females have no wings. In females there is usually a rigid ovipositor which may be modified for injecting venom, piercing or sawing. It either extends freely or can be retracted, and may be developed into a stinger for both defence and for paralysing prey.

In addition to their large compound eyes, wasps have several simple eyes known as ocelli, which are typically arranged in a triangle just forward of the vertex of the head. Wasps possess mandibles adapted for biting and cutting, like those of many other insects, such as grasshoppers, but their other mouthparts are formed into a suctorial proboscis, which enables them to drink nectar.

The larvae of wasps resemble maggots, and are adapted for life in a protected environment; this may be the body of a host organism or a cell in a nest, where the larva either eats the provisions left for it or, in social species, is fed by the adults. Such larvae have soft bodies with no limbs, and have a blind gut (presumably so that they do not foul their cell).

Adult solitary wasps mainly feed on nectar, but the majority of their time is taken up by foraging for food for their carnivorous young, mostly insects or spiders. Apart from providing food for their larval offspring, no maternal care is given. Some wasp species provide food for the young repeatedly during their development (progressive provisioning). Others, such as potter wasps (Eumeninae) and sand wasps (Ammophila, Sphecidae), repeatedly build nests which they stock with a supply of immobilised prey such as one large caterpillar, laying a single egg in or on its body, and then sealing up the entrance (mass provisioning).

Predatory and parasitoidal wasps subdue their prey by stinging it. They hunt a wide variety of prey, mainly other insects (including other Hymenoptera), both larvae and adults. The Pompilidae specialize in catching spiders to provision their nests.

Some social wasps are omnivorous, feeding on fallen fruit, nectar, and carrion such as dead insects. Adult male wasps sometimes visit flowers to obtain nectar. Some wasps, such as Polistes fuscatus, commonly return to locations where they previously found prey to forage. In many social species, the larvae exude copious amounts of salivary secretions that are avidly consumed by the adults. These include both sugars and amino acids, and may provide essential protein-building nutrients that are otherwise unavailable to the adults (who cannot digest proteins).