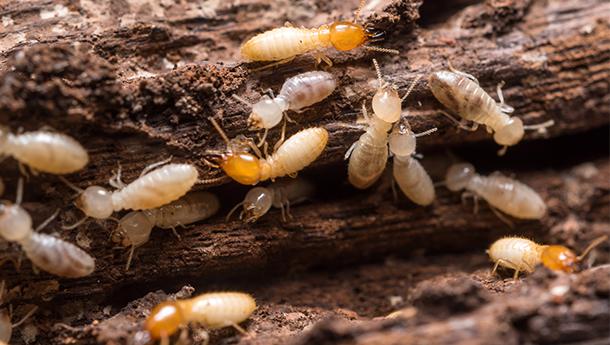 Termites are eusocial insects that are classified at the taxonomic rank of infraorder Isoptera, or as epifamily Termitoidae within the cockroach order Blattodea. Termites were once classified in a separate order from cockroaches, but recent phylogenetic studies indicate that they evolved from cockroaches during the Jurassic or Triassic. However, the first termites possibly emerged during the Permian or even the Carboniferous. About 3,106 species are currently described, with a few hundred more left to be described. Although these insects are often called “white ants”, they are not ants.

Like ants and some bees and wasps from the separate order Hymenoptera, termites divide labour among castes consisting of male and female “workers” and “soldiers” that are usually sterile. All colonies have fertile males called “kings” and one or more fertile females called “queens”. Termites mostly feed on dead plant material and cellulose, generally in the form of wood, leaf litter, soil, or animal dung. Termites are major detritivores, particularly in the subtropical and tropical regions, and their recycling of wood and plant matter is of considerable ecological importance. 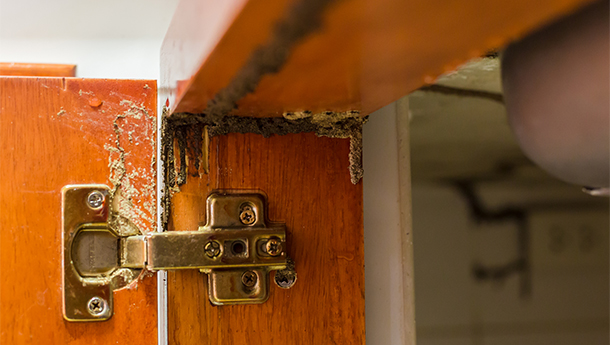 Termites are often compared with the social Hymenoptera (ants and various species of bees and wasps), but their differing evolutionary origins result in major differences in life cycle. In the eusocial Hymenoptera, the workers are exclusively female. Males (drones) are haploid and develop from unfertilised eggs, while females (both workers and the queen) are diploid and develop from fertilised eggs. In contrast, worker termites, which constitute the majority in a colony, are diploid individuals of both sexes and develop from fertilised eggs. Depending on species, male and female workers may have different roles in a termite colony. The life cycle of a termite begins with an egg, but is different from that of a bee or ant in that it goes through a developmental process called incomplete metamorphosis, with egg, nymph and adult stages. Nymphs resemble small adults, and go through a series of moults as they grow. In some species, eggs go through four moulting stages and nymphs go through three. Nymphs first moult into workers, and then some workers go through further moulting and become soldiers or alates; workers become alates only by moulting into alate nymphs.

A FEW STEPS TO HELP YOU WITH TERMITES

Below are a few steps, along with trained pest control professionals, you can take to help rid your home or business of those hungry wood eating termites.

Keeping notes of their location in your home or business helps and should be discussed with us prior to service.

The termite killer that we use is designed to protect your home or business for an extended period of time.

Call us! After discussing your options and with your approval, we will begin to rid your home or business of those destructive pests.

For our residential and commercial customers, we offer scheduled return visits at locked-in pricing. This saves you money while maintaining a termite-free environment.

Termite alates only leave the colony when a nuptial flight takes place. Alate males and females pair up together and then land in search of a suitable place for a colony. A termite king and queen do not mate until they find such a spot. When they do, they excavate a chamber big enough for both, close up the entrance and proceed to mate. After mating, the pair never go outside and spend the rest of their lives in the nest. Nuptial flight time varies in each species. For example, alates in certain species emerge during the day in summer while others emerge during the winter. The nuptial flight may also begin at dusk, when the alates swarm around areas with lots of lights. The time when nuptial flight begins depends on the environmental conditions, the time of day, moisture, wind speed and precipitation. The number of termites in a colony also varies, with the larger species typically having 100–1,000 individuals. However, some termite colonies, including those with large individuals, can number in the millions.

The queen only lays 10–20 eggs in the very early stages of the colony, but lays as many as 1,000 a day when the colony is several years old. At maturity, a primary queen has a great capacity to lay eggs. In some species, the mature queen has a greatly distended abdomen and may produce 40,000 eggs a day. The two mature ovaries may have some 2,000 ovarioles each. The abdomen increases the queen’s body length to several times more than before mating and reduces her ability to move freely; attendant workers provide assistance.

Termites are found on all continents except Antarctica. The diversity of termite species is low in North America and Europe (10 species known in Europe and 50 in North America), but is high in South America, where over 400 species are known. Of the 3,000 termite species currently classified, 1,000 are found in Africa, where mounds are extremely abundant in certain regions. Approximately 1.1 million active termite mounds can be found in the northern Kruger National Park alone. In Asia, there are 435 species of termites, which are mainly distributed in China. Within China, termite species are restricted to mild tropical and subtropical habitats south of the Yangtze River. In Australia, all ecological groups of termites (dampwood, drywood, subterranean) are endemicto the country, with over 360 classified species.