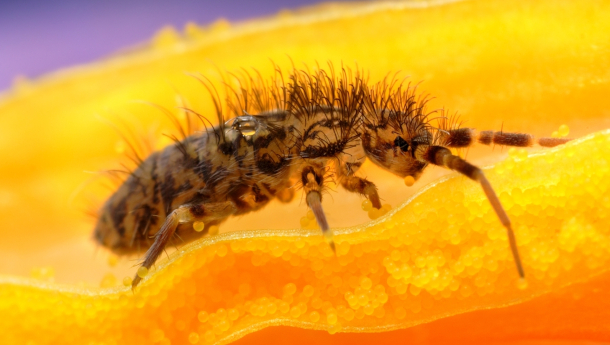 Springtails (Collembola) form the largest of the three lineages of modern hexapods that are no longer considered insects (the other two are the Protura and Diplura). Although the three orders are sometimes grouped together in a class called Entognatha because they have internal mouthparts, they do not appear to be any more closely related to one another than they are to all insects, which have external mouthparts.

Some DNA sequence studies suggest that Collembola represent a separate evolutionary line from the other Hexapoda, but others disagree; this seems to be caused by widely divergent patterns of molecular evolution among the arthropods. The adjustments of traditional taxonomic rank for springtails reflects the occasional incompatibility of traditional groupings with modern cladistics: when they were included with the insects, they were ranked as an order; as part of the Entognatha, they are ranked as a subclass. If they are considered a basal lineage of Hexapoda, they are elevated to full class status. 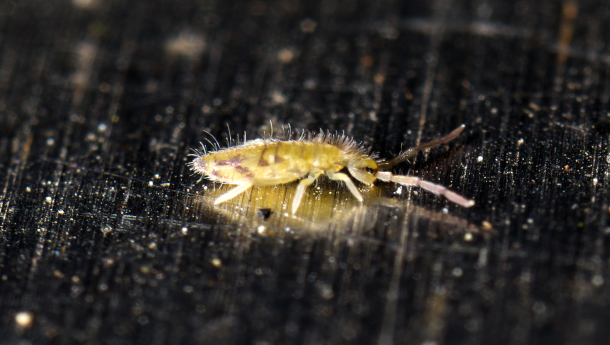 Collembolans are omnivorous, free-living organisms that prefer moist conditions. They do not directly engage in the decomposition of organic matter, but contribute to it indirectly through the fragmentation of organic matter and the control of soil microbial communities. The word “Collembola” is from the ancient Greek κόλλα kólla “glue” and ἔμβολος émbolos “peg”; this name was given due to the existence of the collophore, which was previously thought to stick to surfaces to stabilize the creature.

The Springtail killer that we use is designed to protect your home or business for an extended period of time.

Call us! After discussing your options and with your approval, we will begin to rid the area around your home or business of those invasive Springtails.

Specific feeding strategies and mechanisms are employed to match specific niches. Herbivorous and detritivorous species fragment biological material present in soil and leaf litter, supporting decomposition and increasing the availability of nutrients for various species of microbes and fungi. Carnivorous species maintain populations of small invertebrates such as nematodes, rotifers, and other collembolan species. Springtails commonly consume fungal hyphae and spores, but also have been found to consume plant material and pollen, animal remains, colloidal materials, minerals and bacteria.

Springtails are cryptozoa frequently found in leaf litter and other decaying material, where they are primarily detritivores and microbivores, and one of the main biological agents responsible for the control and the dissemination of soil microorganisms. In a mature deciduous woodland in temperate climate, leaf litter and vegetation typically support 30 to 40 species of springtails, and in the tropics the number may be over 100.

In sheer numbers, they are reputed to be one of the most abundant of all macroscopic animals, with estimates of 100,000 individuals per square meter of ground, essentially everywhere on Earth where soil and related habitats (moss cushions, fallen wood, grass tufts, ant and termite nests) occur. Only nematodes, crustaceans, and mites are likely to have global populations of similar magnitude, and each of those groups except mites is more inclusive: though taxonomic rank cannot be used for absolute comparisons, it is notable that nematodes are a phylum and crustaceans a subphylum. Most springtails are small and difficult to see by casual observation, but one springtail, the so-called snow flea (Hypogastrura nivicola), is readily observed on warm winter days when it is active and its dark color contrasts sharply with a background of snow.

In addition, a few species routinely climb trees and form a dominant component of canopy faunas, where they may be collected by beating or insecticide fogging. These tend to be the larger (>2 mm) species, mainly in the genera Entomobrya and Orchesella, though the densities on a per square meter basis are typically 1–2 orders of magnitude lower than soil populations of the same species. In temperate regions, a few species (e.g. Anurophorus spp., Entomobrya albocincta, Xenylla xavieri, Hypogastrura arborea) are almost exclusively arboreal. In tropical regions a single square meter of canopy habitat can support many species of Collembola.

The main ecological factor driving the local distribution of species is the vertical stratification of the environment: in woodland a continuous change in species assemblages can be observed from tree canopies to ground vegetation then to plant litter down to deeper soil horizons. This is a complex factor embracing both nutritional and physiological requirements, together with behavioural trends, dispersal limitation and probable species interactions. Some species have been shown to exhibit negative or positive gravitropism, which adds a behavioural dimension to this still poorly understood vertical segregation. Experiments with peat samples turned upside down showed two types of responses to disturbance of this vertical gradient, called “stayers” and “movers”.

As a group, springtails are highly sensitive to desiccation, because of their tegumentary respiration, although some species with thin, permeable cuticles have been shown to resist severe drought by regulating the osmotic pressure of their body fluid. The gregarious behaviour of Collembola, mostly driven by the attractive power of pheromones excreted by adults, gives more chance to every juvenile or adult individual to find suitable, better protected places, where desiccation could be avoided and reproduction and survival rates (thereby fitness) could be kept at an optimum. Sensitivity to drought varies from species to species and increases during ecdysis. Given that springtails moult repeatedly during their entire life (an ancestral character in Hexapoda) they spend much time in concealed micro-sites where they can find protection against desiccation and predation during ecdysis, an advantage reinforced by synchronized moulting. The high humidity environment of many caves also favours springtails and there are numerous cave adapted species, including one, Plutomurus ortobalaganensis living 1,980 metres (6,500 ft) down the Krubera Cave.

The horizontal distribution of springtail species is affected by environmental factors which act at the landscape scale, such as soil acidity, moisture and light. Requirements for pH can be reconstructed experimentally. Altitudinal changes in species distribution can be at least partly explained by increased acidity at higher elevation. Moisture requirements, among other ecological and behavioural factors, explain why some species cannot live aboveground, or retreat in the soil during dry seasons, but also why some epigeal springtails are always found in the vicinity of ponds and lakes, such as the hygrophilous Isotomurus palustris. Adaptive features, such as the presence of a fan-like wettable mucro, allow some species to move at the surface of water (Sminthurides aquaticus, Sminthurides malmgreni). Podura aquatica, a unique representative of the family Poduridae (and one of the first springtails to have been described by Linnaeus), spends its entire life at the surface of water, its wettable eggs dropping in water until the non-wettable first instar hatches then surfaces.

In a variegated landscape, made of a patchwork of closed (woodland) and open (meadows, cereal crops) environments, most soil-dwelling species are not specialized and can be found everywhere, but most epigeal and litter-dwelling species are attracted to a particular environment, either forested or not. As a consequence of dispersal limitation, landuse change, when too rapid, may cause the local disappearance of slow-moving, specialist species, a phenomenon the measure of which has been called colonisation credit.

Springtails are well known as pests of some agricultural crops. Sminthurus viridis, the lucerne flea, has been shown to cause severe damage to agricultural crops, and is considered as a pest in Australia. Onychiuridae are also known to feed on tubers and to damage them to some extent However, by their capacity to carry spores of mycorrhizal fungi and mycorrhiza helper bacteria on their tegument, soil springtails play a positive role in the establishment of plant-fungal symbioses and thus are beneficial to agriculture. They also contribute to controlling plant fungal diseases through their active consumption of mycelia and spores of damping-off and pathogenic fungi. It has been suggested that they could be reared to be used for the control of pathogenic fungi in greenhouses and other indoor cultures.

Various sources and publications have suggested that some springtails may parasitize humans, but this is entirely inconsistent with their biology, and no such phenomenon has ever been scientifically confirmed, though it has been documented that the scales or hairs from collembolans can cause irritation when rubbed onto the skin. They may sometimes be abundant indoors in damp places such as bathrooms and basements, and incidentally found on one’s person. More often, claims of persistent human skin infection by springtails may indicate a neurological problem, such as delusory parasitosis, a psychological rather than entomological problem. Researchers themselves may be subject to psychological phenomena. For example, a publication in 2004 claiming that springtails had been found in skin samples was later determined to be a case of pareidolia; that is, no springtail specimens were actually recovered, but the researchers had digitally enhanced photos of sample debris to create images resembling small arthropod heads, which then were claimed to be springtail remnants. However, Steve Hopkin reports one instance of an entomologist aspirating an Isotoma species and in the process accidentally inhaling some of their eggs, which hatched in his nasal cavity and made him quite ill until they were flushed out.

Although firmly denied by the US government despite the existence of the Pine Bluff Arsenal of biological weapons, destroyed in 1971–1972 under Nixon’s presidency, it has been reported that springtails were used by the US army as a “six-legged weapon” in biological warfare performed during the Korean War. Species cited in allegations of biological warfare in the Korean War were Isotoma (Desoria) negishina (a local species) and the “white rat springtail” Folsomia candida. According to these reports, isotomids were intended to serve as carriers of fatal diseases (anthrax, dysentery, cholera, small pox), dropped by airplanes above rebel villages.

Sexual reproduction occurs through the clustered or scattered deposition of spermatophores by male adults. Stimulation of spermatophore deposition by female pheromones has been demonstrated in Sinella curviseta. Mating behaviour can be observed in Symphypleona. Among Symphypleona, males of some Sminthuridae use a clasping organ located on their antenna. Many collembolan species, mostly those living in deeper soil horizons, are parthenogenetic, which favours reproduction to the detriment of genetic diversity and thereby to population tolerance of environmental hazards. Parthenogenesis (also called thelytoky) is under the control of symbiotic bacteria of the genus Wolbachia, which live, reproduce and are carried in female reproductive organs and eggs of Collembola. Feminizing Wolbachia species are widespread in arthropods and nematodes, where they co-evolved with most of their lineages.

In polar regions that are expected to experience among the most rapid impact from climate warming, springtails have shown contrasting responses to warming in experimental warming studies. There are negative, positive and neutral responses reported. Neutral responses to experimental warming have also been reported in studies of non-polar regions. The importance of soil moisture has been demonstrated in experiments using infrared heating in an alpine meadow, which had a negative effect on mesofauna biomass and diversity in drier parts and a positive effect in moist sub-areas. Furthermore, a study with 20 years of experimental warming in three contrasting plant communities found that small scale heterogeneity may buffer springtails to potential climate warming.