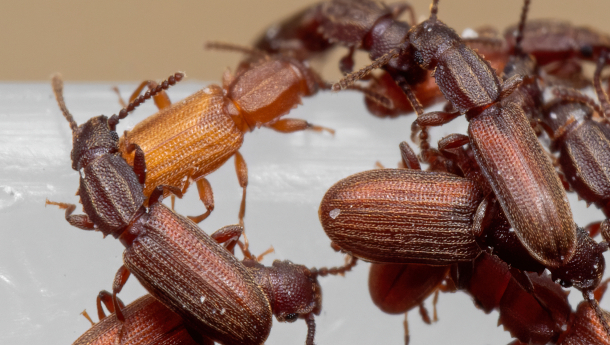 Pantry Pests come in all shapes and sizes. They all have their own specific needs and wants. Here at Some Comfort Pest Control we understand this. So, with each home or office the approach to control these pesky pests will most likely be different. Below is just one example of a Pantry Pest. There are many more that can and will attempt to invade your pantry.

Oryzaephilus surinamensis, the sawtoothed grain beetle, is a beetle in the superfamily Cucujoidea. It is a common, worldwide pest of grain and grain products as well as chocolate, drugs, and tobacco. The species’s binomial name, meaning “rice-lover from Surinam,” was coined by Carl Linnaeus, who received specimens of the beetle from Surinam. 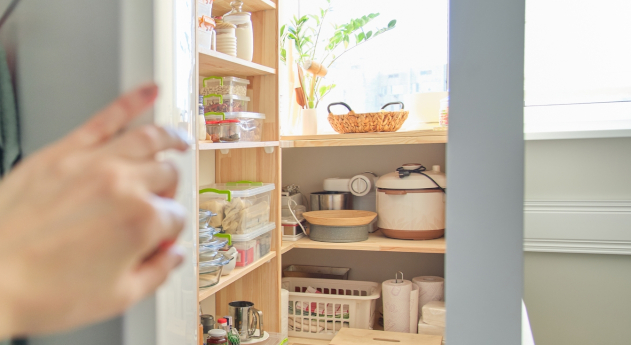 O. surinamensis can be found worldwide. The beetle is one of the most commonly encountered stored product pests and is widespread within the food industry and can be found in food manufacturing, storage, and retail facilities, as well as in home pantries. O. surinamensis is less common in colder climates such as Canada and the Northern United States.

Below are a few steps, along with trained pest control professionals, you can take to help rid your home or business of this and other Pantry Pests

The Pantry Pests killer that we use is designed to protect your home or business for an extended period of time.

Call us! After discussing your options and with your approval, we will begin to rid the area around your home or business of those sneaky and very hungry Pantry Pests.

O. surinamensis is a slender, dark brown beetle 2.4–3 mm in size, with characteristic “teeth” running down the side of the prothorax. It is nearly identical to Oryzaephilus mercator, or the Merchant Grain Beetle, however, O. surinamensis has smaller eyes and a broader, more triangular head; O. surinamensis unlike O. mercator are unable to fly.

A female can produce 43-285 eggs in their six to ten month average lifespan which are deposited on a food mass. The ideal temperature range for larvae development within eggs is about 27-29°C (80-85°F), under such conditions they hatch in three to five days.

Larvae are yellow-white with brown heads and grow up to 3mm. They crawl freely around the food mass and feed on broken pieces of grain or grain kernels damaged by other insects, larger larvae may bore into kernels. Larvae account for the majority of damage done to grain. Larvae molt two to four times before pupation.

Larvae pupate by constructing cocoon-like coverings using broken pieces of grain. Emergence as adults occurs after about one week.

Adults can live on average six to ten months, though they can live as long as three years. The total life cycle is 27 – 51 days at 85–95 °F (29–35 °C). Adults seek out new sources of food for breeding. In areas which have severe infestations of O. surinamensis adults have been reported to nibble on the skin of people, however, these bites are not harmful.