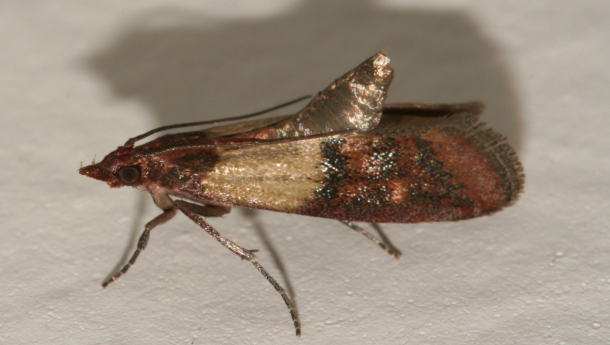 The Indianmeal-Moth (Plodia interpunctella), also spelled as Indian meal moth and Indian-meal moth, is a pyraloid moth of the family Pyralidae. Alternative common names are weevil moth, pantry moth, flour moth or grain moth. The almond moth (Cadra cautella) and the raisin moth (Cadra figulilella) are commonly confused with Indian-Meal moths due to similar food sources and appearance. The species was named after being noted for feeding on Indian-meal or cornmeal and it does not occur natively in India as the usage Indian mealmoth would suggest. It is also not to be confused with the Mediterranean flour moth (Ephestia kuehniella), another common pest of stored grains. 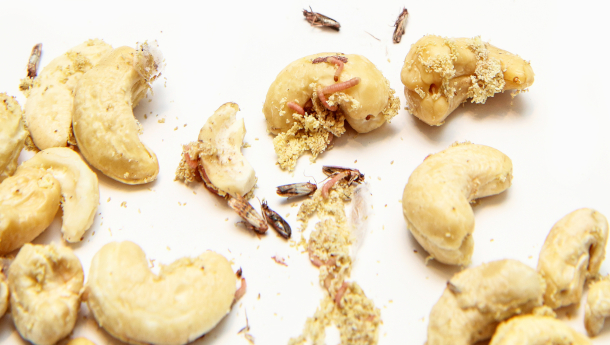 P. interpunctella larvae (caterpillars) are commonly known as waxworms. It is important to note that they are not the same species as the waxworms often bred as animal feed. Rather, they are a common grain-feeding pest found around the world, consuming cereals, fruits, and similar products. Substantial efforts have been taken in the United States to control the moth’s damage to grain crops.

The larvae of this species have the ability to bite through plastic and cardboard; thus, even sealed containers may be infested. Once found, the moths are difficult to eradicate. The last instar larvae is also able to travel long distances before pupating; thus, a given infestation site may be located a great distance from the nearest pupation site. In addition to food sources, this species can reproduce and pupate on articles of clothing and any source of clothing must be inspected to prevent reinfestation.

A FEW STEPS TO HELP YOU INDIAN-MEAL MOTHS

Below are a few steps, along with trained pest control professionals, you can take to help rid your home or business of an Indian-Meal Moth invasion.

The Indian-Meal Moth killer that we use is designed to protect your home or business for an extended period of time.

Call us! After discussing your options and with your approval, we will begin to rid the area around your home or business of those sneaky Indian-Meal Moths.

Plodia interpunctella has been found on every continent in tropical habitats, excluding Antarctica. Within the United States, the moth is most commonly found in Florida, where it thrives in the tropical habitat. The moth lives in a wide range of conditions, making it a persistent pest. It is often found at food storage facilities worldwide, specifically in grain bins or grain storage buildings.

Adults are 8–10 mm in length with 16–20 mm (~​3⁄4-inch) wingspans. The distal two thirds of their forewings are generally reddish brown in color with a copper luster. They can also be bronze or dark gray. The more proximal parts of the wings are yellow-gray or white-gray, with a dark band at the intersection between the proximal and distal regions. The hindwings, in general, are uniformly gray.

The eggs of the Indian-meal moth are white, ovate, and very small. It is difficult to see them with the naked eye. Newly-hatched larvae are equally difficult to see. They are mostly off-white in color, have brown heads,and develop through five to seven larval instars. When these larvae mature, they measure about 12–14 mm long. Larvae also have three sets of legs near the head and five sets of prolegs protruding from the abdomen. The legs help the larvae move over long distances in order to find pupation sites.

Indian-meal moths feed on a large range of plants, grains, and other human food products.

Moths feed on many plant-based foods. These foods include dry pet food (plant based), birdseed, cereal, soup mixes, bread, pasta, rice, flour, spices, dried fruits and nuts. There is strong evidence that the northern Manitoba wheat supports the development of the moth. Other optimal diets include sultanas, American yellow corn and almonds. Groundnuts and maize meal, on the other hand, result in a longer development time for the moths.

Indian-meal moths are also known to cannibalize larvae. However, this often leads to viral granulosis infections spreading through an Indian-meal moth population, though healthy larvae are picked more often than unhealthy larvae for cannibalism. Typically, cannibals do not eat closely related individuals, which might share genes with them, but when given the choice between siblings and unrelated individuals, caterpillars tend to cannibalize their siblings.

Though Indian-meal moths generally do not migrate over long distances, they do engage in long-distance foraging flights. These flights take place during the twilight hours during which blue light (400–475 nm) rather than UV light (10–400 nm) is dominant and attracts the moths. To add to this, blue light’s role in the Indian-meal moth foraging behavior has recently been developed as a form of pest control since it is attractive to the moth.