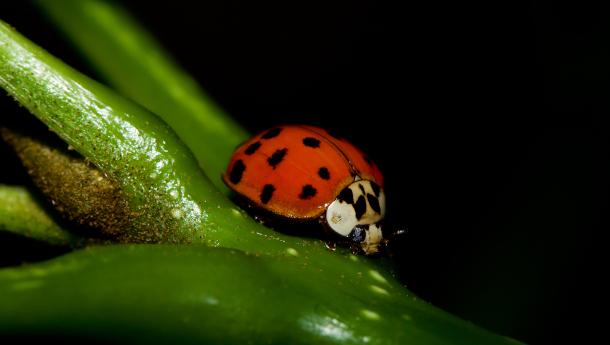 Harmonia axyridis, most commonly known as the harlequin, multicolored Asian, or Asian ladybeetle, is a large coccinellid beetle. This is one of the most variable species in the world, with an exceptionally wide range of color forms. It is native to eastern Asia, but has been artificially introduced to North America and Europe to control aphids and scale insects. It is now common, well known, and spreading in those regions, and has also established in Africa and widely across South America. This species is conspicuous in North America where it may locally be known as the Halloween ladybeetle. It earns this name as it often invades homes during October, in order to prepare for overwintering.

When the species first arrived in the UK, it was labelled in jest as the “many-named ladybird” due to the great quantity of vernacular names. Among those already listed other names include multivariate, southern, Japanese, and pumpkin ladybird. 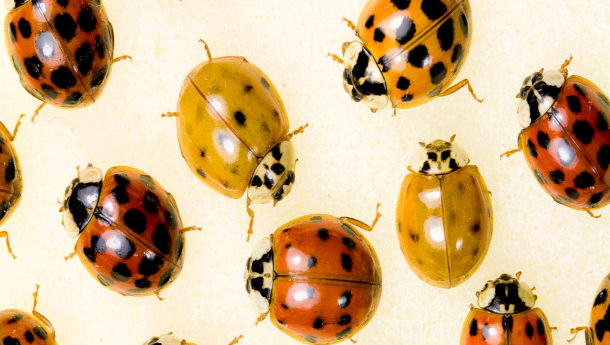 Harmonia axyridis secretes a number of defensive compounds, one of which, (9Z,17R)-9-Octadecene-1,17-diamine (harmonine) has been isolated from its haemolymph. This molecule has been reported to have broad-spectrum antimicrobial activity that includes human pathogens. Antibacterial activity is most pronounced against fast-growing mycobacteria and Mycobacterium tuberculosis, and the growth of both chloroquine-resistant Plasmodium falciparum strains is also inhibited.

The Pantry Pests killer that we use is designed to protect your home or business for an extended period of time.

Call us! After discussing your options and with your approval, we will begin to rid the area around your home or business of those sneaky and very hungry Pantry Pests.

Harmonia axyridis is a typical coccinellid beetle in shape and structure, being domed and having a “smooth” transition between its elytra (wing coverings), pronotum, and head. It ranges from 5.5–8.5mm in size. The common color form, f. succinea, is orange or red in colouration with 0–22 black spots of variable size. The other usual forms, f. conspicua and f. spectabilis, are uniformly black with, respectively, two or four red markings. The pronotum is white with variable black patterning, ranging from a few black spots in an M formation to almost entirely black. The underside is dark with a wide reddish-brown border.

However, numerous other forms have also been recorded. Extreme forms may be entirely black, or feature complex patterns of black, orange and red.

The large size of this species is usually the first clue to its identification. Despite variation, this species does not generally overlap in pronotal or elytral pattern with any other species, except in unmarked orange or red forms. In Europe it is similar to the much smaller Adalia decempunctata, while in America it is similar to the much narrower Mulsantina picta and spotless forms of Adalia bipunctata. When identification is difficult, the underside pattern usually enables a reliable conclusion. Identification is most simple for the common forms, while less common varieties may take longer to identify. They always have reddish-brown legs and are obviously brown on the underside of the abdomen, even in the melanic colour forms.

Harmonia axyridis becomes dormant in cooler months, though it will move around whenever the temperature reaches about 10 °C (50 °F). Because the beetles will use crevices and other cool, dry, confined spaces to overwinter, significant numbers may congregate inside walls if given a large enough opening.

These beetles make some use of pheromones to signal to each other, allowing for the large gatherings often seen in the autumn. However, many aggregation cues are visual, both at long (picking out light-coloured structures that are distinct from their surroundings) and short (picking out pre-existing aggregations to join) distances, while nonvolatile long-chain hydrocarbons laid down by previous aggregations also play a significant role in site selection. Both visual and hydrocarbon cues are more important than volatile pheromones.

They often congregate in sunlit areas because of the heat available, so even on fairly cold winter days, some of the hibernating beetles will “wake up” because of solar heating. These large populations can be problematic because they can form swarms and linger in an area for a long time. These beetles can form groups that tend to stay in upper corners of windows. This beetle has been also found to be attracted to dark screening material for its warmth. This beetle has good eyesight; it will return from a location to which it is removed, and is known to give a small bite if provoked.

Harmonia axyridis, like other ladybeetles or ladybirds, uses isopropyl methoxy pyrazine as a defensive chemical to deter predation, and also carries this chemical in its hemolymph at much higher concentrations than many other ladybeetle species, along with species-/genus-specific defensive compounds such as harmonine. These insects will “reflex bleed” when agitated, releasing hemolymph from their legs. The liquid has a foul odour (similar to that of dead leaves), a bitter taste, and can stain porous materials. Some people have allergic reactions, including allergic rhinoconjunctivitis when exposed to these beetles. Occasionally, the beetles will bite humans, presumably in an attempt to acquire salt, although many people feel a pricking sensation as a ladybeetle walks across the skin. Bites normally do no more harm than cause irritation, although a small number of people are allergic to bites.

These beetles can be difficult to identify because of their variations in color, spot size, and spot count of the elytra. The easiest way to identify H. axyridis f. succinea is to look at the pronotum and see if the black markings look like a letter “W” or “M”. This species has more white markings on the pronotum than have most native North American species, though this is not useful if not comparing it to North American species.